I love my fixed gear, but I often find myself struggling to keep up with the roadies. It seems no matter how hard I paddle, the roadies pass right by me. Fixed gear bike, by definition, doesn’t have gears, after all. So, sometimes it seems like road bikes are the ideal bikes for commuting.

Not so fast! (Pun intended). Because when it comes to city riding, you just can’t beat a fixie. Don’t believe me? Here are ten reasons why fixies beat road bikes for city commuting.

Editor’s note: This article was updated on October 12, 2021, to include additional information regarding fixed gear and road bikes.

Contents show
What’s the difference between a fixed gear and a road bike?
1. Fixed gear bikes are lighter
2. They are less expensive
3. Fixies are not as likely to get stolen
4. Easy to repair and work on
5. Easier to sore in an appartment
6. Fixies are more efficient
7. Fixies are more relaxing to ride
8. Fixies provide a better cardio workout
9. Stronger connection between you and the road
10. Fixies just look so damn cool
Conclusion

What’s the difference between a fixed gear and a road bike?

Before we move on, let’s clear up some terminology.

A fixed-gear bike is still a single speed but cannot freewheel. What does this mean in practical terms? Whenever the rear wheel turns–the pedals also turn, either in a forward or backward direction. So, you can’t freewheel or coast on a fixed-gear bike.

Road bikes are multi-geared bicycles designed for long distances. They often emphasize speed. The road bike gets its name from the terrain it is designed for. Road bikes have many components, gears and can be extremely expensive.

Okay, now that we got that out of the way, what are some reasons why a fixed gear bike might be better for city living?

A fixed-gear bike typically weighs less than its geared counterpart. The difference in weight is accounted for by the lack of gear levers, a lighter chainring and rear sprocket setup, and the lack of dérailleurs. Okay, it’s only a couple of pounds lighter, but less weight makes all the difference if you’re tired or, in the case of bike messengers and couriers, spending all day on your bike.

Additionally, cities usually have multi-story buildings. And not all of those buildings will have elevators. And even if they do, sometimes they don’t work. So, having a lighter bike is very important for city use.

2. They are less expensive

In general, fixed-gear bikes are less expensive than geared bikes. Why? Simple, there are fewer components involved. Also, they are often constructed using less expensive materials.

3. Fixies are not as likely to get stolen

On average, over 188,500 bicycle thefts are reported stolen every year in the United States. Yikes! But Consider this. Fixed gear bikes have fewer parts, making them often less expensive. The resale value just isn’t there for a thief to risk their freedom for. In short, road bikes and mountain bikes scream, “steal me!“ to a thief. Not so with a fixie.

Another reason they are less likely to get stolen is that, well, they are harder to ride. Most people have heard the story about the thief who failed to make his getaway in the car he was stealing, simply because he couldn’t drive a stick-shift. Riding a fixed-gear bike is somewhat similar.

It takes some time to get used to it. Most people can’t just hop on and go. Go head, as one of your non-fixie friends to hop on and steal your bike. You’ll immediately see why most bike thieves steer clear of fixies.

Now, of course, it completely depends on the make and model. Dosnoventa bikes are well over $2,000–But that’s not the type of bike you’ll find locked up overnight, now, is it?

If you are concerned about your bike getting stolen. Check out our article on how not to get your bike stolen. Also, check out some of these top-rated bike locks below. These are the best in the market. 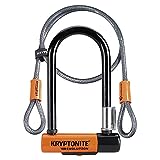 4. Easy to repair and work on

Because they have fewer components, fixed-gear bikes are easier to maintain and are less expensive when it comes to repairs. You only need to worry about lubricating the chain drive and ensuring other fixtures are tightened and secure. Parts requiring replacement are limited to brake pads due to normal wear and tear.

Regular servicing, wheel removal, and cleaning, etc., is much simpler because a fixie doesn’t have the complex gear dérailleurs you need to deal with on a geared bike.

The dérailleurs on a road bike will suffer wear and tear easily from regular use. They are moving parts, after all, and replacement or repairs can end up being expensive. A fixed-gear bike doesn’t have any such problem. You’d need to seriously abuse it to break the rear drive sprocket or the front chainring.

Of course, the chain itself could break, or one of the spokes, but these are relatively simple to repair and not very expensive.

5. Easier to sore in an appartment

Fixed gear bikes are easy er to store in tight spaces than geared bikes. this is because it’s easy to remove the front and back wheels and even the handlebars. This gives you great flexibility when storing your bike for a long time. You can store your bike in the closet or even under your bed. This is much more difficult to do with a geared bike.

Take a look at our article on how to store your bike in an apartment for more tips on cycling storage.

Cycling on a fixed gear bike provides greater efficiency in terms of the energy transfer from the pedal to the rear wheel. This is due to the length of the chain being shorter and straighter and the fact that there are no gear pulleys at the rear.

Again, it might be a small factor for some cyclists, but those who spend enough hours on their bike daily or do long-distance commuting will feel the difference after a while.

7. Fixies are more relaxing to ride

It’s easier to ride when you never have to shift gears; you simply focus on pedaling, braking, and being aware of surrounding traffic. The keyword being traffic. Of which there is no shortage.

The city streets demand your attention at all times. There’s a lot of traffic laws you have to follow, and cars zooming by. A simpler bike allows you to focus more on the road and less on the bells and whistles of the bike. When you mount up on a fixed-gear bike, you never need to think about choosing which gear to use or which gear you stopped in. You just ride; Making riding simpler and more fun.

There is no cosign on a fixed gear bike. The lack of gears and the connection to the wheels require more work. You are always moving your legs along with the wheels. This effort keeps your heart pounding and your cardiovascular system running at top speed.

Okay, not everybody rides their bike to get fit. But a fixed-gear bike makes your legs work harder, and that work keeps you fit. This is one of the reasons why people love fixed gear bikes for exercise. you to use your full force

9. Stronger connection between you and the road

Most riders will tell you that a fixie is more engaging and fun to ride. The connection between rider and bike is more direct due to the lack of complex gearing mechanisms and, in some cases, brakes. It’s just the bike and you. Try riding a fixed-gear bike once, and you’ll immediately notice the difference.

If you want to see this connection argument in action, check out this video from Global Cycling Network that compares fixed gear vs. geared bikes for city commuting.

Let’s face it—fixed gear bikes are sexy as hell. They are so dammed sleek and streamlined. Far more streamlined than their geared counterparts. The combination of their modern design and mechanical simplicity makes them visually appealing.

Whenever I’m in the subway with my bike, I get a ton of looks. I have some beautiful white deep-V rims on my bike—something you most often see on fixed gear bikes. Pretty sweet, wouldn’t you agree?

So, I hope these ten reasons why fixed gear bikes are great for city living have convinced you to ditch the road bike and hop on a fixed or single-speed bike.

In this article, we covered some reasons why fixed gear bikes are great for city living. Here are some key takeaways:

So, do you have something you’d add to our list? Do you agree that fixed gear bikes are the best bikes for city use? Let us know in the comments below (we read and reply to every comment). If you found this article helpful, check out our full blog for more tips and tricks on everything fixie. Thanks for reading, and stay fixed.

As a native New Yorker, Bradley is no stranger to the fixed gear scene. He’s been riding fixed for over ten years. When he’s not on the bike, you can find him practicing his many hobbies including playing guitar, video production, and photography. You got a killer camera there my friend. @nantesfi

It’s a bit rusty but it checks out. Thanks for s